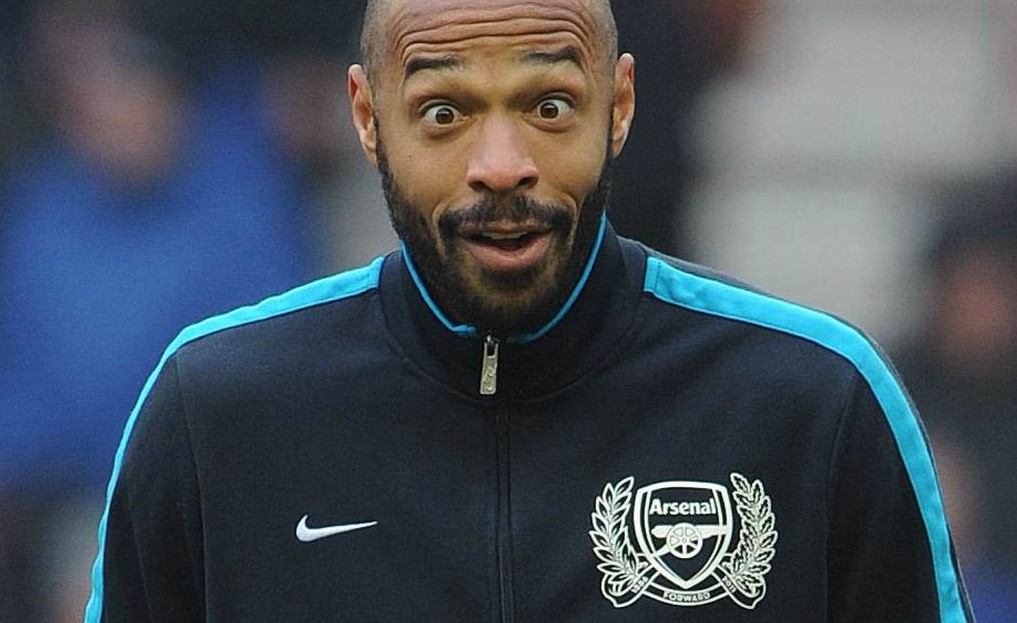 When Thierry Henry took his turn to be hated in the Okeydokefootball podcast he was still an Arsenal player. Still a whining whore attempting to get out of the club. As we all know now he finally got his wish; and no matter how many farewell interviews he did with Arsenal.com professing his love for the club the truth can’t be disguised. This is man who devotes himself to his ego and image and that will always take a far bigger role in his decisions than any affection for Arsenal Football Club.

When the Gunners lost in the Champions League Final in May last year he turned everything back towards himself and his contract, confirming he would stay live on air. Although this was most likely to deftly deflect blame for the defeat away from his shoulders; after he’d missed two glaring chances to score.

He was tired he said. He was apparently being kicked around by Carlos Puyol, every other Barcelona defender, a couple of the stewards and passing blackbirds in the Paris sky. Poor fella, never happen in England… oh wait it happens in every game in every league every single weekend. Well maybe not the blackbirds but certainly the kicking defenders.

After he moaned about the result he moved onto the contract because that night – like every one – is about Thierry bloody Henry.

The next season was to be about building a side worthy of him. It didn’t happen and he spent most of the season on the sidelines with his all-black outfits, arms outstretched for any of the young players to run into when they scored against Charlton or Sheffield United.

Despite barely playing a part in the season of relative failure he decided things weren’t going right enough and started to talk about the “nice” attention of Barcelona and AC Milan.

He didn’t have to say any of this on live TV in an Arsenal shirt ala Paris 2006 so he had no problem prick teasing fans of all three teams from the comfort of a press conference. Loyalty, it seemed, can deteriorate greatly in the space of 12 months.

He complained that the departure of David Dein left him uneasy. What business is it of his? If he’s going to do a pole dance for a couple of European giants who is he to judge the principles of the Arsenal board. But everything at Arsenal had to revolve around this guy and his opinion of himself.

He may have said uncertainty over Arsene Wenger’s position upset him as well but no one believed that. He’d made the wrong decision when he stayed the season before and he knew it; but he couldn’t say this, instead he had to give the papers plenty of headlines with little hints here and there, then give a tearful goodbye speech or three. All this before buggering off to kiss the Barca badge.

In all honesty, Henry probably thought his genius would be enough for Arsenal to do well last season, when this proved to be wrong in the games he actually played in he decided he didn’t have the stomach to stick it out. He wilted and signed a contract with the Spanish giants that had clearly been drawn up a year ago and been rehashed; such was the speed of the deal.

Henry, it cannot be doubted, is an exceptional player; someone who at the top of his game is beautiful to watch. That flick up, turn and volley against Man United in 2001; the outside of the foot beauty against Sparta Prague; the weaving run through the Liverpool defence on Good Friday 2004. All genius, all fantastic to watch but slowly, bit by bit, any goodwill towards him eroded.

He spent the 2005-06 season complaining and complaining about Arsenal’s failure to buy; then ran after Cesc Fabregas like a schoolgirl when the puny Spaniard proved Patrick Vieira’s equal in the Champions League quarter final against Juve.

How could all his blabbering on about the need for quality have helped these youngsters? Training beside a superstar who doesn’t see them as good enough to play with him can hardly of helped their mood. Gerrard does the same trick with Liverpool at the end of every season, demanding world class talent while often not trying a leg when placed on the right wing.

One other element of Henry’s make up that runs against his image as a world beater is his propensity to bottle it in big games. The fluffed lines of the Champions League final was followed up with a dire performance in the World Cup Final two months later.

While the World Cup in 2002 saw plenty of advertisements promoting the concept of ‘va va voom’, Thierry stood still as France crashed out without scoring a goal. Euro 2004 was just as bad; France’s high points coming from a knackered Zidane in the final minutes of the first game against England.

Henry is damaged goods too, with a dodgy injury record and a dodgy temperament that may well culminate in him throwing a strop should he be left on the Barca bench next year – and with their frontline that’s not outside the realms of possibility.

Indeed, the Arsenal fans barely protested when he left, confident at this stage that they deserve better. They’re getting Da Silva who may well poach the goals that Henry found too ugly to bother getting in the six-yard box for. “This is where I belong,” he said last year when signing that “last contract” and looking like an honest footballer in a world gone mad. He’s not that though, he’s just another glory hunting mercenary; something Arsenal probably found out a year too late.