Who: FIFA, an energy drink, cocaine and a huge conspiracy depending on what you believe rudely interrupt Diego Armando Maradona’s last hurrah at USA 1994.

He said what? “They’ve cut off my legs,” Diego Maradona. 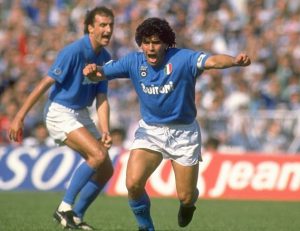 What happened? In 1994 football was braced for the return of Maradona on his natural stage; the World Cup. Not since Garrincha so singularly won the tournament for a Pele-depleted Brazil in 1962 had one man dominated a tournament as much as Diego Armando at Mexico in 1986.

That year, in the sweltering heat, he played like an evil genius just off the front players, hatching assorted attacks and destroying Englishmen’s stiff upper lips like he was born to do so. It was this Diego Maradona, the one that had danced past five English players (and Peter Reid twice) on the way to ‘that’ goal, that people wanted to see as the greatest sporting showpiece on earth made its way to the USA eight years later.

America had long forgotten the New York Metro Stars and ‘sawker’ was at best a kids’ activity; at worst a sport that provided the background to the latest Steve Guttenberg comeback movie. Maradona had long been thrown from his perch as the world’s greatest player, but wanted a second chance; well maybe a fifth chance by this stage.

What better, more profitable union could there be?

The 1990 World Cup in Italy may well have seen Argentina fight their way to the final again but an ankle injury to their number 10 – along with a dearth of creative talent elsewhere – meant that they were an ugly side to watch. In fairness this was an ugly World Cup; indeed the standard was so poor that FIFA banned keepers from picking up from a back-pass in its immediate aftermath.

At that time Maradona was still playing for Napoli; but he would only spend the next season there as the team self-destructed and even the presence of a young Gianfranco Zola pushing him for the number 10 shirt didn’t inspire much form. It was during that season he would eventually pay for his lifestyle.

Maradona had, for his entire time at the southern Italian side, been associated with the local mafia – the Camorra; he had also fathered an illegitimate son; slept with most of the prostitutes within a 50-mile radius; and most unfortunately when it came to his career, developed a massive cocaine habit.

Rumour had it that the little fella had been on the stuff since his days at Barcelona when he felt lonely on his arrival to Europe. He got caught for drug use after a league game in the 90-91 season and would serve a 15-month ban. Napoli let him go to Sevilla where he would spend the year in and out of the side, scoring seven goals in 29 appearances.

With his weight ballooning he went back to Argentina where he was to play the 93-94 season with the very average Newell’s Old Boys. Though when I say he played the ‘season’ with them it’s a little misleading. In fact, he only played five games for them that year and it is this period, during which he was surprisingly picked for the Argentina squad for USA ’94, where the controversy began.

Fast forward to June the next year and Maradona is on the edge of the Greek 18-yard box with his team already 3-0 to the good and he strikes a right foot shot into the top corner. He ran to the TV cameras at pitch-side, his eyes wide open; his mouth screaming a primal call to arms; he looked insane. Everyone watching was delighted though; the bastard was back.

Argentina’s first game in their World Cup group could hardly have gone better; then in the second they beat a well-fancied Nigeria 2-1. Then Diego was led along to a routine drugs test by a plump American woman. He tested positive for the banned stimulant ephedrine. He went home and Argentina weren’t long after him; even though they did go out in decent fashion, losing by the odd goal in five against Romania in the second round.

Then the stories began…

Maradona, it was claimed, was approached by FIFA even before qualifying for the tournament had finished and was asked to get himself fit in time for the finals. The ruling body apparently wanted a ‘banner’ name to sell football to the yanks and Brazil’s Ronaldo was still considered to young a talent to trust this with.

Maradona gave his word he would be fit and sacrificed his season at Newell’s to slim down. However, so goes one rumour, he had yet another blow out on the cocaine and pizza. FIFA stepped in and told him he needed to slim down and do so pronto. They “allowed” him take an energy drink named Rip Fuel which contained ephedrine to aid his second crash-diet on the condition he stopped taking this in time for the tournament.

One story has FIFA reneging on the deal and setting Maradona up after suspicions that he was back on cocaine after the Greece game. Then there’s the official explanation that it was in America that Maradona drank ephedrine-enhanced Rip Fuel for the first time. His team doctor saying the Argentinean version didn’t contain the banned substance and that when they bought it in the States they were unaware that Rip Fuel was loaded with ephedrine.

All of these stories have more than a passing air of nonsense about them; though one common factor seems to be that Maradona certainly was taking a banned substance – whether FIFA sanctioned it behind closed doors or not. The thought that a team doctor at a World Cup wouldn’t check everything he gives the players is ridiculous though.

Maybe FIFA did have a word with him; maybe Maradona did try at first to get in shape all by himself; but the net result is that his international career ended on a terrible note when it seemed it would be a great chapter in football’s greatest story every told.

As it is, FIFA have kept on annoying Maradona, robbing him of the Footballer of the Century Award in 2000. The award was intended to be based upon votes in a web poll, but after it became apparent that the poll favoured Maradona (he had over 50% of the votes), FIFA appointed a ‘Family of Football’ committee to decide the winner. Maradona was instead awarded the title of FIFA Internet Player of the Century; with Pele picking up the official gong. The git.

Maradona is currently in hospital and he’s hardly been out of the news for longer than a month over the last twenty years. While he still provokes controversy and – in general – plenty of affection, it’s a pity his last actions on the international scene will be tarnished as merely a step too far by a desperately flawed man. USA ’94 barely recovered from the shock; let’s hope for the good of ‘sawker’ over there though that David Beckham and Juan Pablo Angel stay away from the Rip Fuel.