Why we hate him: Think Joey Barton in ten years only with more warlord mates. Yup, he’s a man of the people for the people. As long as they’re Serbian. And not Patrick Vieira. Or South African. 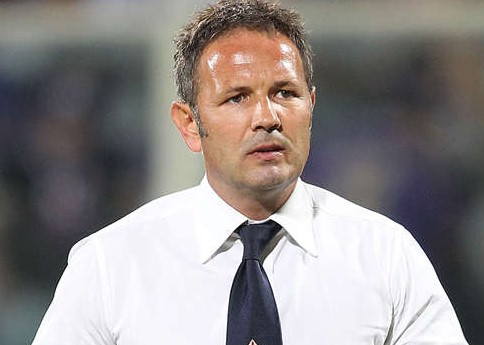 Siniša Mihajlovic, or Sinister as he shall be known on these pages, is a Yugoslav man who has many attributes and shitheaps of ability. The one probably most to the fore is his ability to stir opposition’s players into becoming extremely peeved and invoking blind rage in the opposition’s supporters. The second and final attribute is that he’s a dad to his childers and is in full employment.

He’s made a serious name for himself by scoring the most freekicks (28) in Serie A’s history, including a hat-trick of them in ’98 against Sampdoria, in a 5-2 win whilst at Lazio.

He’s always been more than a tad humble and gracious with his pals; the ultras of SS Lazio. He’s also kept his hands firmly by his sides; never playing up to their inciting racist chants, fascist right-arms aloft and vibes. Ah no, that’s a complete lie; Sinister loved it all and lapped every bit of it right up.

Basics and honours? Well he started his professional career at FK Vojvodina in Yugoslavia and played the best part of three seasons for them scoring a couple of goals. He then moved onto Red Star Belgrade in ’91 and it was with Red Star where he won the European Cup in ’91 scoring one of the peno’s in a shootout. He moved to Italy and Serie A in ’92 when it was then the finest league in Europe.

He started with Roma but that was a disaster and Sampdoria rescued him in ’94. Lazio nipped in for him in ’98, and from then until 2004 he became a regular on the Champions League road show. It was with Lazio that he won the now-no-more European Cup Winners’ Cup in the 98/99 season, also finishing second in Serie A. But in the 99/2000 season they managed to win Serie A, becoming Italian Champions for the first time since ’74 under the guidance of Slick Svennis Eriksson. That year also saw them winning the Italian Cup and the European Supercup. Internazionale Milano purchased his freekicks in ’04, but more on that in a bit.

In a Champions League match in Rome in ’00, Lazio were playing Arsenal. In order for Sinister to properly enjoy the game and to get under the very skin of one Patrick Vieira; Arsenal’s main midfielder, he repeatedly called Pat a mixture of (according to various reports) “black bastard” and “a fucking black monkey”, as apposed to a ‘fucking white Colobus monkey’ which obviously wouldn’t have had the desired effect at all. He was made make a worldwide apology via microphone in the centre circle of the pitch before Lazio’s next home Champions League match, which must have, I’d say, hurt his ideals.

In a strange way of unifying things, Vieira left Arsenal in ’05 to join Juventus. He left them after one season when they were relegated to Serie B due to the whole match fixing scandal that involved nearly all the top teams in Italy. Sinister is not known to have been behind any of the fixing but you know yourself. Vieira then joined Internazionale for the start of the ’06/07 season and what a pro he was, knowing that Siniša Mihajlovic was there since leaving Lazio in ’04. But it wasn’t to become a playing-alongside-each-other issue. Sinister, since the summer, had been installed as the assistant coach of Roberto Mancini at Inter. I’d imagine that if all the masseurs are busy and Pat has an ickle twinge in his shoulder, Sinister would be as glad – as a kettle full of Galway water reaching the boil – to be of service, not without soothingly applying the necessary oils.

Involved with, but not directly of course just in a social sense, warlords, mafia and war criminals in Serbia, he was an ardent supporter of Slobodan Milosevic, who was being tried for genocide at the time. When ‘Arkan’ the despicable Yugoslav/Serbian warlord was shot and killed in a lobby of a Belgrade hotel in 2000, the ultras of SS Lazio unfurled a huge banner in respect of Sinister’s profound admiration for the scumbucket. It’s reported by a normalised Lazio supporter behind their dugout that Siniša, upon seeing the banner, had to come over to the bench and ask for a tissue to blow his nose. He was really overcome by the whole gesture. He also revealed his torso with a tiger tattooed on it to the Lazio fans in honour of Arkan’s “Tigers” paramilitaries who enjoyed many recreational killing sprees.

Sinister was a bit of a phlegm merchant as well, but what’s the point in mentioning the ones who reported him spitting on them when there are probably loads who just spat back, right into his Rudi Voller-esque curls.

Whereas at a normal person’s wedding the pictures show happy folk and drunk uncles, Sinister’s wedding images were all brooding eastern block heavy-handed craggy underworld types (the males that is), the femmes looked lovely. He has five children from this marriage.

As he says himself: “Children are the best thing. You can never get enough of them. To make a comparison, children are like goals.” Good man.

On his sense of style: “I have my own tailor, I visit him every 6 months and I get 2-3 suits…… I always get my suits sewed, because I like everything to fit as founded, but also it isn’t easy to find clothes for my constitution.” Once again, good man yourself.

On being asked where he’ll settle down: “In Yugoslavia and Italy i.e. after my career I plan to live in Rome but often I’ll spend time in Belgrade”

On being asked where he’d rather not settle down: “In South Africa for instance. I don’t like dirtyness, and South Africa is just that.”

But don’t take our word for Sinister’s endearing personality, for he’s available for some captivating email dialogue.