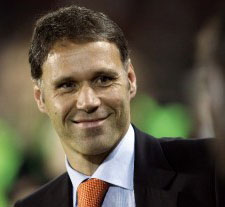 Why is he here? Tragic hero, keen cyclist, didn’t ruin his legacy by managing Newcastle.

Marco Goalo: Man United fans might not agree but the greatest Dutch striker of the last 20 years certainly doesn’t have the face of a horse and ain’t called Ruuuuuuud. Marco van Basten was, all too briefly, the best striker on the planet never mind the best in Holland. In fact he was probably the best player of his day and in today’s market would fetch at least €50 million.

Having come through the Ajax ranks in the early ‘80s he scored 128 goals in 143 games (fuckin hell) for the senior team in six seasons awaking them from their decade-long post-Cruyff slump. He was also a major part of an emerging national side fronted by Ronnie Koeman, Frankie Rijkaard and Ruud ‘Spoofer’ Gullit.

They went to Germany for the 1988 European Championships and after a slow start against Russia; Van Basten scored a hat trick against England and with an utterly fluky win against the Irish they went on to the semi finals. We all know about THAT volley in the final to win the game for his team but it was in the semis against the Germans that he became a legend for his compatriots.

He scored the winner two minutes from time and put to rest the inferiority complex the Dutch side had suffered from against German teams for generations. Doing it on their home turf made it even better. A few days later they lifted the trophy.

A year earlier Van Basten had sauntered over to AC Milan where Honest Silvio Berlusconi had just invested millions. Joined by Rijkaard and Gullit, the Dutch contingent was complimented by Donadoni, Baresi, Maldini and coach Arigo Sacchi. Basically, they had one of the finest teamsheets seen around Europe in the last two decades. Milan won the Serie A title for the first time in nine years in 1988 though Van Basten played only 11 games due to the ankle injury that would plague his career. Nonetheless his Euro 88 exploits bagged him European and World Footballer of the year.

European Cup success came in 88 and 89, then Van Basten had a public falling out with Sacchi and was banned by UEFA for four games after a frankly John Fashanu-esque elbow in a European Cup game. Never thought I’d get those two strikers in the same sentence but there it is!

His form suffered that 1990-91 season and he scored only 11 goals in 33 games. The following year, however, he was back on the goal standard with 25 in 31 games. In the autumn of 1992, after a semi final knockout for the Dutch at the European Championships by Denmark, he scored 13 goals in 15 for Milan. Then injury struck and he would play his last competitive game against Marseille in the Big Cup final, losing to their bent chairman and Chris Waddle (what a sad way to go).

After two years trying to get back to fitness he cycled to a press conference and told reporters he was never going to play again. He had scored 90 goals in 147 games for Milan, twice being the leading marksman in Serie A, and had set a European Cup record of 18 goals in 23 matches for the club.

Despite the elbow, despite the injuries, despite the fact that he’s now a bit of a gay icon and stubborn fool of a manager, Marco Van Basten was the most complete striker that any child of the 80s would have seen. Great touch, beautiful skills, a man for the big occasion (hello Thierry) and HOLY S*** could the man hit the ball on the volley.