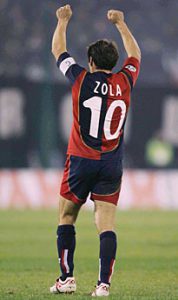 Why is he here? People used to like Chelsea. No really. Mainly because of Zola.

Pocket Fonz: In the late nineties when Chelsea arrived at away grounds, the story goes that as they left the team bus each player would get booed roundly as they stepped off the team bus. All excpet for one man. No prizes for guessing that it wasn’t Dennis Wise, but instead Gianfranco Zola – one of the great players of the Premiership era and now a potent symbol of what made Chelsea such a popular side to watch before the roubles and the cashley’s arrived at Stamford Bridge.

Zola’s career ended in June 2005 when he scored twice against Juventus for his home team of Cagliari but in the previous 20 years he had done more than most footballers could ever dream. He trained with and was understudy to Maradona; he was signed by the man who had a system of intimidation named after him – Luciano Moggi; he won championships, cups and personal honours; and can lay claim to having two jerseys he wore retired – the Chelsea no. 25 and the Cagliari no. 25.

Born on July 5 1966 in Oliena, Sardinia he became a professional at 18 with local club Nuorese and three years later he won his first honour, the Serie C championship. Then, after two years with Turris in southern Italy he stayed in the region with a move to the then all conquering Napoli – run by Moggi and led by the rotund genius of Diego Maradona.

They only spent one year together, with Napoli winning the league that season, but in that time as Maradona’s understudy Zola says that… well he’ll tell it better.

“I learnt everything from Diego. I used to spy on him every time he trained and learned how to curl a free kick just like him. After one year I had completely changed. I saw him do things in training and in matches I had never even dreamed possible. He was simply the best I’ve ever seen. I’m not saying I wouldn’t have been a good player if I had not played with him at that stage of my career but I do know I wouldn’t be the player I am now.”

The year after playing with Maradona, Zola inherited the no. 10 shirt. And for three more seasons he was the star player of the team scoring an average of ten a season from his deep-lying forward position. In 1993 he moved to the new Serie A superpower of Parma and together with another one of our Legends Faustino Asprilla brought them to a UEFA Cup and a second place finish in the league.

During the first two seasons with Parma (where he would score 49 goals in 102 games) he had an amazing average of scoring one in very three free kicks he took. Despite this record and the adoration of the public, by 1996 he was disillusioned with life at the club where players such as Hristo Stoichkov (yet another one of our Legends), Enrico Chiesa and Hernan Crespo had been brought in as competition.

In November of that year he joined Chelsea for Ł4.5 million, joining Ruud Gullit’s increasingly brilliant, if a little inconsistent side. It seems strange but many had their doubts at the time, but then this was the Premiership age when every club was buying in a wealth of foreign talent. For every Dennis Bergkamp there were four or five Finidi Georges.

Zola however, made an instant impact scoring and setting up goals in abundance, as his partnership with Mark Hughes helped Chelsea to the FA Cup at the end of the ’97 season. Despite joining the league three months after it began he also won the 1997 Football Writers’ Player of the Year. The next year would be even better with Zola helping new manager Gianluca Vialli to the League Cup and Cup Winner’s Cup. The second of those trophies was won thanks to a goal from the diminutive Sardinian who scored 21 seconds after coming on in the second half; his place in the first team denied by injury.

Writing this it’s hard to believe this is the same Chelsea that play in front of us week in week out in the Premiership. At the time, their style of play, and Zola’s excellence in particular, made them many people’s ‘second team’.

Everyone remembers him dancing around the United defence in a league game before sliding the ball past a static Schmiechel; back-heeling the ball in from a corner against Norwich; every one of his 14 free kicks scored in his time in England; not to mention a peach of a goal against Liverpool in the early rounds of the ’97 FA Cup, curling the ball around David James as they came back from two down to win 4-2.

His international career included a place in Italy’s 1994 squad though he got little time on the field. While he scored 10 goals in 35 international games – including the high point of scoring in a 1-0 victory against England at Wembley in 1997 – he was never a regular in the team. Italian coaches generally don’t pick players who aren’t plying their trade on home-soil and after being left out of the 1998 World Cup squad he was as good as retired from the international stage.

Chelsea won the FA Cup again in 2000, beating Aston Villa in a hopeless game 1-0 and Zola helped them to a Champions League position in the league. Later that year they had a classic last-16 game against Barca in Europe where they won 3-1 in the first leg (with Zola scoring a beautiful free kick), only to lose the away game in extra time to a Rivaldo-inspired Barca.

He would help them to a Champions League position again in 2003 before leaving for home and Serie B side Cagliari. He did so only weeks before the Russian revolution at Chelsea. Rumour has it that after being unable to sign him back, Roman Abramovich made a failed attempt to buy the entire Italian club.

Once again the year after Chelsea tried to lure him back to England only to fail once more; the Italian preferring to captain his local side after helping them to promotion. Indeed, if anything represents the Chelsea of Zola’s time compared to now it’s his recent quote that:

“Money can give you many things but respect cannot be bought. What I have achieved in the way people regard me, in my mind, is remarkable.”