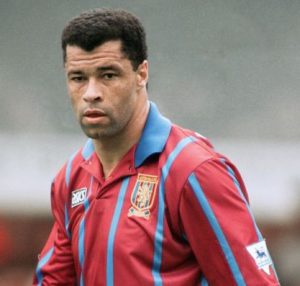 Why is he here? Ireland’s greatest ever defender. Wonderful footballer

Curse of the Black Pearl: Everybody loves Paul McGrath. He was the all action hero of Italia 90 and USA 94. He was Aston Villa’s player of the season four times in a row. His nickname was God. When Nelson Mandela visited Dublin just as Ireland’s team came back from the World Cup in Italy the South African president was greeted with cheers of ‘Ooh ah Paul McGrath’s da’.

There’s always a ‘but’ though. In this case, a pretty big one. Paul McGrath is an alcoholic – a pretty heavy one, well a pretty chronic one. His autobiography is called ‘Back from the Brink’ for one; a welcome break from the old fashioned ‘My Story’ no doubt but it’s hardly going to be a happy read. His decision to undertake the project with Irish Independent journalist Vincent Hogan has paid dividends both financially and mentally. Great sales have been boosted by a plethora of interviews where those writing report a happy, peaceful and, as always, humble McGrath.

He’s divorced twice, with drink being blamed for both.

He drank a pint of Domestos in one suicide attempt.

He slashed his wrists in front of his young son in 1989 in another attempt at taking his life.

This is a troubled man, one who could down a bottle of vodka after training, perhaps even before. But the fact of the matter is that Paul McGrath, whether on the drink or off it, was a great player. After that particular failed suicide in 1989 he starred for Aston Villa against Everton in a 6-2 victory only days later. Five years on he dominated Alan Shearer one particular Premiership Saturday afternoon when Villa came up against Blackburn. At the time he was absolutely shitfaced.

“I always felt comfortable on a football pitch,” McGrath said recently while promoting his book, “That was the time I wanted to shine. It is wonderful to hear your name being chanted in the stadium, you cannot buy that.” He added ominously though, “I didn’t have a nerve in my body when I played football. The nervousness came when I wasn’t playing football, that’s when I had problems.”

For those of you who don’t know, McGrath was born in Dublin in late 1959, the child of a Dublin mother scared of having an illegitimate mixed-race child while his Nigerian father had run off never to be seen again. After being put up for adoption, he was shunted between orphanages before he was reunited with his mother in his early teens. One suspects growing up black in Dublin at present can’t be easy; never mind McGrath’s childhood and teens in the 1970s and 80s. He said as much recently: “It could be very racist; I think that’s probably where some of my insecurities began.”

He was without doubt though a gifted footballer, one who would attract the attentions of League of Ireland stalwarts St. Pats Athletic, whom he signed for in 1981. A late developer perhaps but McGrath had been for trials in England before but his homesickness had brought him back across the water several times, even resulting in him becoming an apprentice sheetmetal worker for a short period.

After one year with St Pats, where the fans gave him the legendary name of the ‘The Black Pearl of Inchicore’ he went to Manchester United and this time he stayed in England. For the next seven years he would be one of United’s best performers, helping them to the 1985 FA Cup and forming a brilliant central defensive partnership with international compatriot Kevin Moran.

Under both Ron Atkinson and then Alex Ferguson he excelled, but there was one major difference. Under Atkinson, the drinking culture of McGrath, Norman Whiteside, Moran and Bryan Robson was tolerated due to their exceptional talent. This may have been due partly to the fact the Big Fat Racist Ron was in the same nightclubs as them and merely told the players to go home before training the next day. When Ferguson arrived he saw things differently.

Although the Scot said that Whiteside was one of the most naturally talented players he’d ever worked with and that McGrath had a football talent so perfect it was “almost musical”, both were shown the door after two hectic seasons under the man from Govan. Both too were suffering from serious knee injuries but that was just the icing on the (most likely cooked with booze, booze and more booze) cake.

“I hated Fergie at the time but I have come to understand what he did,” McGrath once commented, “in fact, I wish I had listened to him and changed my lifestyle. He has been nothing but kind to me since I left the club and has shown himself to be a really decent human being.”

But dumped from Man U in 1989, McGrath was at his lowest ebb and began to self-harm as well as drink even more heavily after moving to Aston Villa for a paltry Ł425,000. But it was at the English Midlands club that he became a true legend, playing for seven seasons and, as mentioned, being their Player of the Year in majority of those seasons.

His reading of the game under Graham Taylor and Ron Atkinson amongst others was widely saluted by pundits, team-mates and opponents alike. Proof of this came when he was voted PFA Player of the Year in 1993, an award usually given to show boats (hello Ginola and Cristiano) or frontmen (Cantona, Les Ferdinand, Shearer).

He won the League Cup twice with Villa and gained the name God from their fans – a title he’d rarely acknowledge but one that still apparently sticks whenever he goes back to Villa’s heartlands. Two years at Derby County, as well as a brief spell at Sheffield United would follow before he retired in 1998. During the last five years or so of his career he barely trained due to his knee problems but would still be first choice on a Saturday – indeed during his career he had eight knee operations in total.

On the international scene… well as RTE expert Eamonn Dunphy says – McGrath was one of our three greatest footballers. The others being Keane and Johnny Giles.

McGrath was superb in Euro ’88 against England, Russia and Holland; hitting the post against the latter, nearly sending Ireland through to the semi-finals and knocking the eventual winners out. Italia ’90 saw him utilised mainly in the centre of midfield where he held his own with some excellent passing.

But it was in USA ’94 that his reputation as Ireland’s lion amongst defence was cemented. We had a poor tournament save for the first game against Italy in New York’s Giants Stadium where Ireland led through an early Ray Houghton goal. McGrath, in ten beautiful seconds summed up how his team would not be beaten that day when he blocked a Roberto Baggio shot; then he blocked a volley from the same man before leaping to his feet and taking a ball in the face from a Giuseppe Signori shot. To finish he chased the ball upfield and may as well have told every Italian in New York to fuck off back to the boat home. This was Paul McGrath’s game and they weren’t going to deny him.

One online Villa fan site recently posted an article entitled ‘Tribute to a King’ on the Black Pearl, with one part in particular standing out….

“For me the supreme McGrath moment came against QPR at Villa Park. Their forward was through, one on one with Nigel Spink. There’s no way McGrath can get a tackle in without giving away a penalty. Except that he does, and not only does he stop the attack but he comes out with the ball and lays it off for a Villa player, McGrath clenches his fist, you can see him muttering ‘yesss’ to himself, knowing the bit of magic he’d brought off. And as one, the crowd, both Villa and Rangers supporters, rise to acclaim something special.”

That’s why we love Paul McGrath, that’s why most football fans, whatever their allegiance, respect him throughout Britain and anywhere else the English top-flight was shown during his era. He lives now quietly in Waterford. Everyone and his dog wishes only the best for him, he’s back from the brink, let’s hope this legend stays that way.