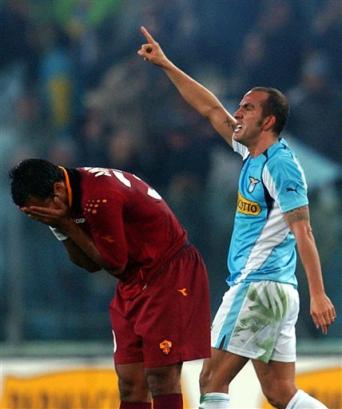 Why is he here? Absolutely unpredictable and brilliant forward who, despite that whole fascism thing, was always addictive viewing. And he pushed over a ref. Genius.

A good lad: I dunno if it’s just me but I think AS Cisco Roma sounds like a dodgy Italian IT company. Even the knowledge that they are in fact a Serie C2 club doesn’t arouse much interest. It’s only when you find out that this is the last place where Paulo di Canio will ply his trade do you realise that AS Cisco Roma might just be worth knowing about.

Di Canio is without doubt their star player though this is a position that Di Canio has held for a good portion of his career. Since he left Italy in 1996 to join Celtic having won the Italian championship with AC Milan the season before, he may often have been accused of being a big fish in a small pond, but screw that. Between his season in the SPL and his following seven years in England’s top tier he was a player impossible to ignore.

In his early career, Di Canio had been a part of Italy’s elite, playing for his hometown club of Lazio to begin with (more on them later) before moving to the Old Lady, or Juventus as local postmasters know them. Having spent three years moving in and out of the side (he played only 58 times during that period, scoring a mere six goals), he found himself at Napoli.

Though the glamour team of Italy’s south had long since passed their Maradona-inspired heyday, Di Canio became somewhat of an idol during one season there, scoring the goal that kept them in Serie A on the final day of the season. He then started stripping down to his very, very white y-fronts, having thrown his kit to the crowd.

Two years followed way up north at AC Milan, the second season bringing him that league title and a move to Glasgow. A cult hero after one season there (15 goals in 37 games, the most times he had played in one year for any team to that point in his career), there was uproar when he signed for Sheffield Wednesday who were still in the Premiership at the time.

He would enjoy a year and a half at Wednesday becoming the closest the league had to another Eric Cantona; scoring brilliant goals, giving odd interviews and winning immense affection from his home supporters. Di Canio was Le God in Sheffield. Not exactly the most lofty of positions, but surely comfortable nonetheless.

Then came December 1998 when he was sent off against high-flying old fogies Arsenal. Referee Paul Alcock showed Di Canio the colour of the card and the Italian promptly protested as all Italians do in times of crisis. He waved his hands, blamed inadequate foreigners and was disgusted that life had dared to go against him and his stylish white boots.

But then he pushed Alcock who, and this really has to be seen to understand how funny it is, stumbled back five or six paces before falling on his arse like the first drunk on a stag weekend. Only camper.

Shock. Fury. Dismay. These are just some of the emotions we didn’t feel. No matter how hard the FA and other football types in the media attempted to tell the public how disgraceful this was, we all knew Alcock’s pantomime dive was just plain hilarious.

Wednesday, in a no win situation decided to get rid of him, a decision that may well have ultimately sent them down a season later. Their talisman found his way to the manager in the Premier League who speaks most to the common man – ‘Arry Redknapp.

Having signed in January 1999 he instantly made West Ham one of the finest teams to watch in the league. Di Canio helped them to fifth position in the Premiership that season, the following year he would score Match of the Day’s goal of the season with his amazing volley against Wimbledon.

One of his other fine goals in a West Ham shirt came at Old Trafford in an FA Cup game. Through on goal, Di Canio carried on despite a static Man United defence stopping, having assumed he would be flagged offside. Even the United keeper that day, Fabien Barthez, tried to con the Italian by raising his arm to claim Di Canio was off, and not moving as the ball went past him into the far corner of the United net. Di Canio wheeled off in celebration. Barthez looked like a melon. Absolute quality.

Di Canio’s time at West Ham ended after a row with new manager Glenn Roeder and he ended up at Charlton Athletic. Players only ever seem to ‘end up’ at Charlton, poor fellas.

Once that season was over though he returned to his birthplace of Rome where he once again wore the sky blue of Lazio. I remember being at the Stadio Olimpico soon after he signed and the fervour with which the fans loved him surprised me.

Every scarf, t-shirt and flag on the way to the stadium had his likeness on it, while on the way into the ground I spotted Wednesday, Celtic and West Ham jerseys in plentiful supply, each one of them with ‘Di Canio’ printed on the back. When we entered the ground and his name was announced in the first eleven over the loud speakers the ground went bananas. I thought they must be in trouble if a then 36 year-old was here to rescue them, but at the time I didn’t realise his true connection with his hometown fans.

In his youth he had been part of the Ultras fan group amongst Lazio supporters who have always been linked with fascism. In his first season back in Rome he scored the equalising goal in the local derby and outraged the left-leaning Roma supporters by raising his arm in a fascist salute.

He would later say he did this as it “gives me a sense of belonging to my people”. He would then say that he “is a fascist not a racist”. All very hard to fathom from a man who once won a Fair Play award from FIFA for refusing to tap a ball into an empty net against Everton as the opposing keeper lay injured.

Italian Prime Minister at the time, Silvio Berlusconi said that the salute “did not have any significance”, describing the Lazio player as “an exhibitionist but a good lad”.

We don’t know what to make of Paulo and his beliefs other to say that he’s clearly a bit f**ked in the head. However, we go on football for our Legends and he did enough to get in here on those merits. Indeed we could have put the above ‘salute’ incident in our Moments in Football, or he may even have ended up in the Hate section had this site a political conscience to speak of.

Di Canio, as mentioned before, is impossible to ignore and never boring, in essence the polar opposite of Frank Lampard, whom we try to ignore and is never not boring. Not being a Lampard is enough for us, Legend it is.