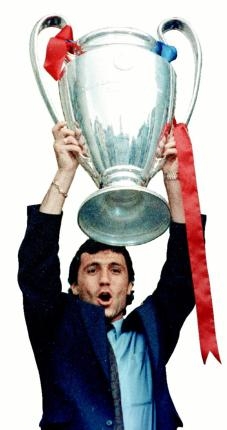 Why is he here? Nutcase made good, Hristo frankly hates pretty much everyone on the planet, particularly his team mates. With that kind of arrogance ya can’t help but like the guy. Could hit a free kick too.

El Pistolero: Everybody’s favourite surly Bulgarian, and lets face it there’s a lot to choose from, Hristo Stoichkov is not only one of the greatest players from the 1990s but is also the proud owner of some of the finest nicknames in the business.

There’s El Pistolero from his time at spiritual home Barcelona, but then there’s Christo (nice God complex there), Itzo (eh… okay), the Mad Bulgarian (spot on), The Dagger (a bit strong but we can see it), Raging Bull (nice) and our favourite… ‘the Modern Left’ which certainly beats ‘Stoickkovy’ which inevitably would have been his name had he made his way to the Premiership.

Currently the manager of Bulgaria, he was born in Plovdiv, the second largest city in Bulgaria and a town where is father had played in goal for the local team, Spartak Plovdiv. At the age of ten, he joined Maritza, a team from his hometown, and remained there until 1984. His youth coaches later described him as mild and even “somewhat afraid of getting thrown out of the club”.

After graduating from the youth program at Maritza, Stoichkov did not receive any offers from professional teams and was forced to move into the lower divisions with Hebros Harmanli. One year later he was finally noticed by Manol Manolov, the general manager of CSKA Sofia.

CSKA was an institution linked to the Bulgarian army (at that time professional sports were not allowed in the country.) The team coach was Dimitar Penev, who, according to several things we’ve read, had “a remarkable sense for finding and developing talented youngsters”. Penev is credited with moulding Stoichkov and from 1986 to 1989 he won three league championships and three Bulgarian Cups, enough to make Barcelona interested.

At the time Johann Cruyff was building a side to break Real Madrid’s dominance in Spain, having ruled the league with their frontline of Emilio Butragueno and Michel. Stoichkov though didn’t settle in initially… and by that we mean he got banned for six months for charging at a referee who had red carded him. But that year, like the following three Barcelona won the title, along with their first European Cup at Wembley in 1992. Stoichkov became a huge hero with the Barca faithful and amazingly even became friendly with noted git Romario, with the two forming a brilliant attack.

It was around this time as well that he helped his nation qualify for the 1994 World Cup (though France self-destructing in Bulgaria’s qualifying group was also a plus). Trained by Stoichkov’s old mentor Penev, the team lot their first game at USA 94 to Nigeria 3-0. All looked lost, and even a 4-0 win against Greece didn’t improve the mood as they faced Argentina in their last group game.

They had to win or draw to make sure of qualifying for the next round but weren’t fancied to do anything of the sort. But an Argentina side still reeling from losing Maradona to a drugs ban fell short and Stoichkov led his team to a two-nil win. The Bulgarians then went past Mexico and their little multi-coloured tit of a goalkeeper in the second round.

Despite his great years with Barca it was almost certainly the quarter-final against Germany that cemented his position as one of the finest players on the planet. One nil down in the second half, Stoichkov lobbed a perfect free kick over a German wall to equalize and in probably the finest moment of the entire tournament, the bald yet still quality Yordan Lechkov scored a diving header to win the game 2-1. Although they lost by the same scoreline in the semi against Italy the team went home heroes and Stoichkov recognised as a world star.

He left the World Cup and landed into a mess at Barca where he had fallen out with Cruyff and moved to Parma. Rumour has it that Gianfranco Zola was against the move and his non-acceptance of another playmaker disrupted the team so much that Stoichkov got limited opportunities and left at the end of the season. Though this is a rumour from Stoichkov’s main fan site so it’s probably rubbish – Zola a bully? Not that little hobbit surely.

Anyway, the move signalled the start of the twilight years for the Bulgarian genius. Another spell at Barca from 1996-98 didn’t work out with new coach Luis van Gaal using him sparingly. He played out his time back home and in far flung places like Saudi Arabia and America (ie Rancho Relaxo).

Still, a dull end to a great career can’t be held against him. He’s doing a pretty sterling job with an average Bulgarian side at the minute so a return to a big European club should happen eventually, particularly if Frank Rijkaard ever starts to get things wrong. His surly manner may also mean that he might just punch Mourinho’s lights out on the touchline which really is what football is sorely lacking at the moment. Bring back Hristo.

Diego Armando Maradona “”Stoichkov and I are friends, not only because we are strong in the field, but also because we are crazy heads.” Indeed.
JJ Worrall